Eight Bursledon gigs took to the River Hamble on Saturday for the Hamble River Raid, and to contest the Coxswain’s Oar, a trophy awarded to the first gig to complete a punishing five mile course from Hamble to Bursledon and back.

It was won this year byYachting Sports, pulled by James Morland, John Foulkes and YM’s Ben Meakins. They managed to pull away at the start and kept just ahead of second placedExocet, pulled by the Hamble Sea Scouts, throughout the race.

Further back a team from Southampton Amateur Rowing Club had their first taste of pulling a heavy displacement boat, far removed from their usual lightweight skiffs. Ashore, local MP Chris Huhne started the race and awarded the prizes, while the Sea Scouts provided the facilities.

The Bursledon gigs are fifteen foot fibreglass pulling boats which can be rowed by up to six oarsmen. Many are sponsored by local businesses, and thanks to them and the efforts of local people, rowing is experiencing a huge revival on the river, with more and more people showing an interest in the sport. The formation of the Hamble River Rowing Club was announced on Saturday to encourage this growth. 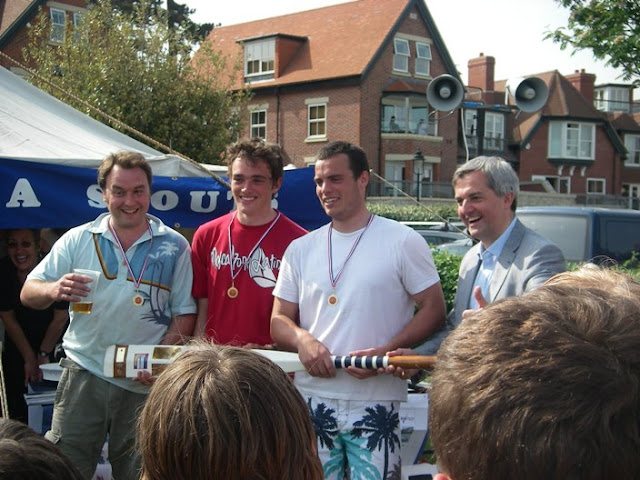 MP Chris Huhne with the the winning team.

For more information, and for details of future events, click here.