Most boats would benefit from upgrading to a better anchor for a host of reasons. We take a look at 8 of the best anchors on the market right now

Securing your anchor do it is ready to drop could get you out of a tight spot when you can't sail out of trouble. Credit: Theo Stocker

Good ground tackle and understanding how to anchor properly opens up the option to stay overnight in stunning bays and creeks, away from costly marinas and expensive harbour moorings. And picking the best anchors is essential in terms of safety too as you may well need it to hold you off a lee shore in the event of engine failure.

However, unless your boat’s anchor has been upgraded recently, the chances are it’s of a type that will not provide good holding power.

What to look for in a good anchor?

Much has changed in the world of anchors in the past 20 years, which led to classification societies such as Lloyds adding a new Super High Holding Power certification category for these anchors in 2008.

Most of the best anchors exceed the requirements for this by a wide margin.

These advances in anchor technology and different types of anchor mean older boats won’t have been equipped with what we would now consider to be decent ground tackle when they were new.

This is also true for most vessels built in the last 20 years. Until recently the latest generation of anchors was relatively expensive, so were generally only fitted as standard equipment to very high quality yachts.

The best anchors tend to have a concave profile akin to the shape of a shovel. This digs more firmly into the seabed without tending to act like a plough when under load.

Another important aspect to look for in a good anchor is the tip weight, as loading as much weight here as possible is a massive help in enabling it to penetrate weed and other difficult types of sea bed.

Typical new generation anchors have 35-45 per cent of their weight on the tip. Some also have roll bars that prevent the anchor landing on the seabed upside down.

Whatever anchor you choose, beware of cheap unbranded copies. These rarely have the precise geometry needed to maximise holding power. Some are also badly cast and therefore weaker than the original design.

7 of the best anchors on the market right now

This was one of the first of the new generation of ultra high holding power anchors and quickly gained much acclaim, despite an initially high price tag.

The Rocna is well engineered and has an excellent reputation for digging in quickly and easily. Once set it then offers excellent holding.

A roll bar is incorporated, but a downside of Rocnas is they do not stow neatly on all bow rollers.

To solve this problem the company developed the Vulcan series, which doesn’t have the roll bar and is shaped to fit on a wider range of bow rollers.

Buy it now on Amazon.co.uk

Buy it now on Amazon.com

Buy a Rocna Vulcan on Amazon.co.uk

Note: We may earn a commission when you buy through links on our site, at no extra cost to you. This doesn’t affect our editorial independence.

The latest model from this UK company offers the benefits of a new generation anchor at very attractive prices.

It has a winged design with concave flukes to maximise holding power in a variety of sea beds, a ballasted tip that enables it to dig in readily and is self righting, even though the roll bar is optional.

The Epsilon is intended as a direct replacement for Lewmar’s long-running plough style Delta anchor.

Although the Epsilon’s shank is proportionately shorter, the two models share the same basic shank geometry. Therefore, if a Delta fits your bow roller then an Epsilon will also fit.

Buy it now on eBay

Buy it now from Amazon

Buy it now from West Marine (US only)

This aluminium anchor is an older design from more than 30 years ago, but still has a number of advantages that makes it an excellent choice in some circumstances.

It’s biggest feature is very light weight relative to the holding power the anchor provides. This makes it a perfect option for performance catamarans and trimarans, as well as for smaller fast motor boats.

The key downside, however, is that the holding power is achieved through the surface area of the flukes, not the weight of the anchor. This means it’s physically larger than other anchors, although it comes apart like the Spade for easier stowage.

A neat feature is that the angle of the flukes can be varied to suit different types of sea bed.

Buy it now on Amazon.co.uk

Buy it now on Amazon.com

This is another popular modern anchor, but with an important difference to other brands.

The hollow shank can be removed to make stowage easier. This makes it an excellent choice for racing yachts and other vessels that don’t permanently keep the anchor on the bow, or for occasional use as a kedge.

There’s no roll bar, but the tip loading is close to 50 per cent of the total weight, which helps it to dig in and set quickly.

The main drawback of the Spade is one of cost – it’s more complex to manufacture than other designs, so the price is relatively high.

Buy it now on eBay

Professor John Knox spent a great deal of his spare time researching the loads on anchors and rodes.

His work in this area over a period of 20 years contributed a huge amount to our understanding of anchoring and precise causes of anchors dragging or breaking out.

It also led him to develop his own design of anchor that would offer significantly better performance compared to the popular models at the time. It was therefore one of the first of the new generation designs.

The Knox anchor has a patented divided fluke with sharpened edges set at an angle that enables it to dig into the seabed quickly and efficiently.

It’s fitted with a roll bar and, while the shank is made of the highest tensile strength steel available.

Buy it now from Knox Anchors

The Bügel was one of the very first new generation anchors and quickly set a new benchmark in the industry.

It has a flat fluke with lower surface area than later designs, plus a roll bar and a shank made of thick plate.

This makes it a relatively inexpensive anchor, which is undoubtedly a key factor behind its enormous popularity, even though later products offer higher holding power.

Buy it now from compass24.com

This was the first anchor to receive Lloyds Super High Holding Power certification when the classification was introduced in 2008.

It’s a fabricated design that uses two layers of steel for the fluke and relies on a roll bar, rather than a ballasted tip, to self-right.

The upper slot in the shank is intended for use in rocky sea beds, or anchoring in coral. The idea is that if the anchor becomes stuck the rode can be slid to the shank end of the slot, enabling the anchor to be retrieved without using a tripping line.

The shape of the anchor is designed to fit all conventional anchor rollers.

Buy it now from Marinesuperstore.com 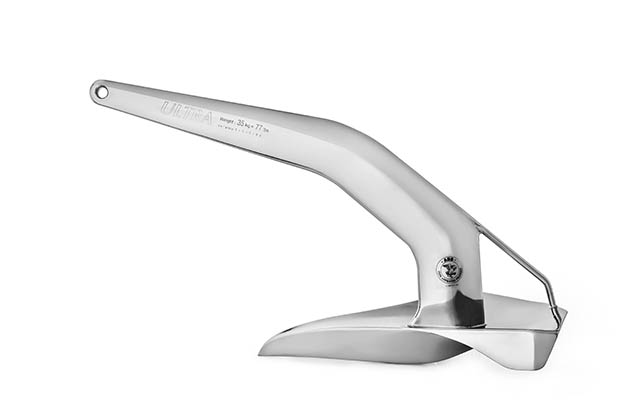 Editor Theo Stocker said: “I was impressed with how quickly the anchor set.

“While our normal 10kg Bruce anchor can struggle in soft sand and weed, the Ultra anchor buried itself almost completely and refused to drag.

“The Ultra’s performance amply delivers on its maker’s promises as is comparable to other stainless anchors,” he concluded.

Inside the October 2022 issue of Yachting Monthly: How to…